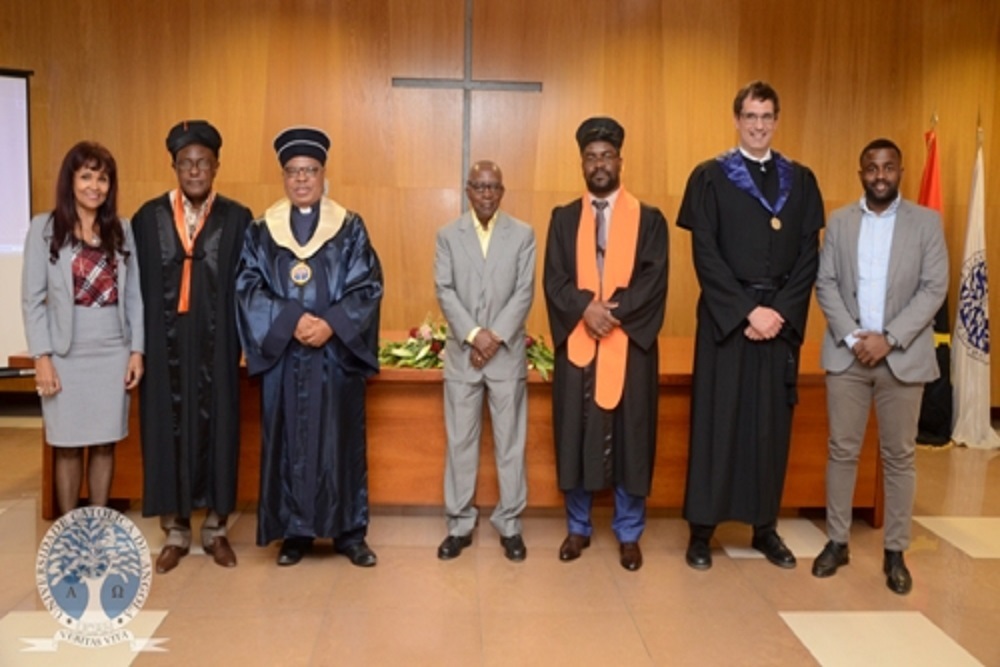 Since June 28, Dr. António Fernandes da Costa has been the first Full Professor of UCAN, for the positive result he obtained in the public exam, held the same day, at the Salão Nobre, at 4:00 p.m.

As a candidate, Dr. António Costa was evaluated by a panel of judges, presided by the Vice-Rector for Research and Extension University, Father Jerónimo Cahinga, also composed by the Pro-Rector of the Catholic University of Porto for the Promotion of the Portuguese Language and Pedagogical Innovation and Scientific Coordinator of the Linguistic Center of the same University, Professor João Veloso, as the first vowel, by the Deputy Director General of ISCED-Luanda and President of the Scientific Council of the Department of African Languages and Literatures, as second vowel and the Director - general of the Superior Pedagogical School of Cunene and Coordinator of the Masters and Portuguese Language of ISCED-Huila, as third vowel.

The event was also witnessed by the Vice-Dean for Academic Affairs, Dr. Maria Helena Miguel, deans, Vice-deans, teachers and students.

Dr. António Costa presented the theme "Modalities in Portuguese". After the presentation of the theme, the then candidate responded with questions put by the members of the jury, who evaluated him. In the end, the jury approved the candidate and, thus, Doctor António Costa became the first Full Professor of the Catholic University.

The Vice-Dean for Academic Affairs, Dr. Maria Helena Miguel stressed that the act has a great significance in the history of the Catholic University of Angola, for being the first. The official also said that Dr. António Fernandes da Costa is worthy of such an achievement and an example to follow.

According to the Statutes of the Teaching Career, the Professor has, among other functions, to guide, direct, govern pedagogically and scientifically certain discipline, group of disciplines, undergraduate or postgraduate course in a Faculty or Department of Education or Investigation.